The Tesovo Division of the North-West Archaeological Expedition invites volun-teers from Sweden to participate in the excavations in Leningradskaya oblast’ in Summer, 2003

The site is in a nice place in the valley of Oredezh - the river that flyes to Luga (some 130 km far from St.Petersburg). In the early medieval eriod it was a non-ordinary settlement with a kind of fortification. It appeared in late 10 c. AD and was a significant center of former Novgorod Land up to the 13th c. (for more information here) 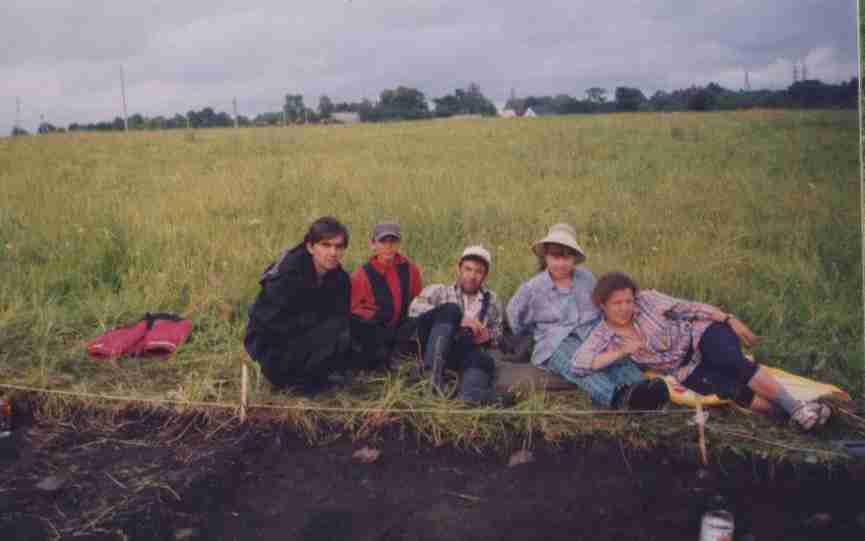 Our expedition began the excavations on the site in 1998 and every year some 20-30 persons from St.Petersburg, its area and also from all over the world (USA, Holland) go there to have 2-3 week excavations. We live in the tents just near the site, there is also a very nice lake nearby.
There are two ways of accommodation: 1. To live in the camp near the settle-ment; 2. To live in small hotel (only in Tesovo region). For the first one You need a sleeping pocket and a tent and for the second You need to pay about 4-5 EUR a day.

The site is in the wood very close (50 km) to St.Petersburg, but in a really wild place (3 km far from the villages). There is a settlement appeared in XIV c. AD. The area is full of small hills ("shapki" means "hats" in Russian) and in XV c. a stone church had appeared there built by a Novgorod nobleman. But then, in late XVIth c. the church was destroyed and the place became wast.
We had small archaeological experience on the site in 1999 and 2000. During them the ruins of the church and the remains of nearby settlement were founded. Our main aim in 2003 is to continue researching the settlement.
There in Shapki, there will be a camp, so the participants must live in tents.

Participation
Unfortunately, Our Institute can not pay anything to the volunteers. You are to come to Russia by Your own and pay about 60 EUR for a week. If You can advice us a source or a foundation to compensate Your expenses we will be very glad.
196244, St.Petersburg, Russia
Vitebskij pr., 31-3-129
St.Petersburg State University
Institute for Complex Social Researches
Center "Petroscandica"
Senior Researcher
Dr. Adrian A. Selin
adrian_selin@mail.ru
http://adrianselin.narod.ru